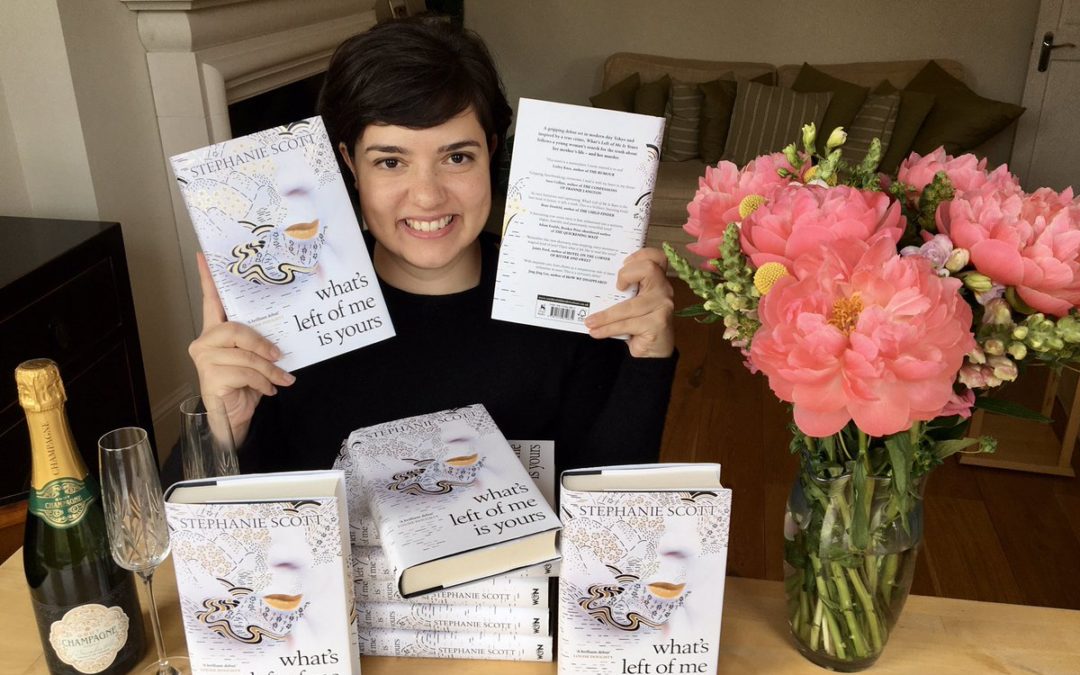 Stephanie Scott’s acclaimed first novel What’s Left Of Me is Yours took ten years to write and publish. It’s been quite a journey, including leaving her job and cancelling her honeymoon to make time to write. Her prize-winning route to becoming an author should inspire every writer who fantasises about taking a risk to pursue their dream.

In 2010 Stephanie Scott was living a life to make her parents proud. Engaged to her university sweetheart, she was a rising star in investment banking and working all hours. Her dedication had been noticed and she was on the verge of a big promotion.

However, rather than continue her banking career, she decided to jack it all in, go back to university and focus on her writing.

Stephanie made the kind of life changes we read about in novels. The week after she left her job she got married. The very next day — with confetti still in her hair — she was back in student accommodation, her husband smuggled into her single room. It took ten years for Stephanie to write and publish a novel about the Japanese marriage break-up industry.

What’s Left of Me is Yours was published in 2020 to great acclaim. The Guardian selected her as one of the best debut novelists of 2020, the Stylist review said it was “Dark, addictive and eye opening – this is a brilliant debut.” The novel, set in modern-day Tokyo and inspired by a true crime, follows a young woman’s search for the truth about her mother’s life – and her murder.

Stephanie’s route to getting published should inspire every writer to persist with their dreams. Find out how she did it.

Small steps to becoming a writer

It all started with a weekend writing historical fiction. To say Stephanie was a novice writer is an understatement — she’d read English at university but had never written fiction before. She produced a short story that weekend and her potential was spotted by course tutor Louise Doughty who encouraged Stephanie to apply for a longer writing course. Louise has remained a mentor, offering writerly advice and wisdom over the past few years.

Louise was the catalyst for everything, says Stephanie, “she’s been there since the beginning and she was extremely encouraging when I decided to give up my job to write full time. She has been a midwife to my first novel in many ways.”

Stephanie researched writing courses and decided to apply to Faber & Faber’s ‘Write A Novel’ course, on which Louise taught, and Oxford University, sending off her one and only short story as her submission for both. She was offered a place on Oxford’s Creative Writing Master’s and a place on Faber’s novel course on the same day her boss approached her about a promotion.

“My boss took me out to lunch to offer me a Vice President position. I had told him about applying to the Faber course beforehand, and at lunch he saw me smiling and said, ‘you’ve got a place on the course haven’t you? You’re going to take it.’ And I did.”

When the money runs out…

During her time in finance, Stephanie had saved enough money to be able to give up work in the short-term but she knew the money wouldn’t last forever and so she set herself until the end of the Master’s to make a decision about whether to write or go back to full time paid employment. “You have to set boundaries, give yourself time to make a decision and see if it works for you.”

“You have to set boundaries, give yourself time to make a decision and see if it works for you.” Stephanie Scott

Her big break came when she won the A.M. Heath Prize for New Writing and the prize money enabled her to keep on writing, as did research funding from the British Association of Japanese Studies who financed a trip to Japan earlier this year.

Stephanie is a talented writer, but she has put time and effort into learning her craft, supported by some of the best courses and tutors available. She did the Faber & Faber course alongside the Oxford Master’s and when that finished she took three courses with UK creative writing charity Arvon.

Stephanie worked across writing genres and disciplines, studying prose, drama and poetry. I first met Stephanie in 2013 when she came to Lumb Bank, Arvon’s writing centre in Yorkshire, to do a poetry course with Philip Goss and Colette Bryce; she was booked onto the following week’s radio drama course, and later followed that up with ‘Lyricism and Style in the Novel’ with Owen Shears and Sarah Hall. I asked her about working across genres and forms.

“Focusing on craft and developing my writing skill set has been invaluable to my progression as a writer, as has the opportunity to write across genres. I’ve found that the qualities prized in one form are often common to all.

“For example, in poetry, the emphasis on concision, rhythm and cadence, making every word count and every phrase earn its place, is also present in great prose. Reading and writing poetry can be extremely beneficial when in search of rigour and attention to detail to your own writing.

“Similarly, just as drama is admired for its wit and brevity, learning how playwrights develop plot and emotional relationships using only dialogue can be instrumental when working on one’s own dramatic scenes in prose. Experimenting with form will teach you a lot about your work, what you want to create and what you want to achieve.”

Get advice from mentors

Each year Arvon runs a mentoring prize for emerging writers in association with the Jerwood Charitable Foundation. Nine writers — three poets, three playwrights and three novelists — receive a year’s mentoring, an immersive course at an Arvon centre, a week’s retreat, advice from agent Simon Trewin, publication in the annual Arvon anthology and a showcase event in London.

Stephanie applied after attending the Arvon courses and won a place on the scheme. She worked with Nikita Lalwani, who has offered expert advice and guidance on the novel.

“Receiving a place on the Jerwood Arvon Mentoring Scheme has been one of the highlights of my writing life, it has been truly amazing to work with Nikita Lalwani, she is an exceptional reader and critic. I think it is key for every young writer to have a mentor whose expertise and judgement they trust.” She said.

Writing a novel is a long game — it can take years to research, write, and improve your craft.

Looking at her fellow creative writing students, Stephanie reckons that the difference between those who stopped writing and those who have continued often comes down to who makes sacrifices. “Prepare to become unpopular,” was the advice given to Stephanie by Louise Doughty, and years later with cancelled evenings out, less time with friends, less time with her spouse, it has been worth it.

Stephanie says: “It will seem, at times, that what you are doing is madness, and while prizes or recognition can help with your confidence, another important part of being a writer is to look the madness in the face; you have to believe in your project and you have to write for yourself. I have had to cut a great deal out of my life in order to make room for my writing, there are weeks where I don’t see my friends, go to the movies or even the gym, but I don’t regret any of it. Writing is my job now, it’s what I do every day and that is more rewarding than anything else.”

On Stephanie’s desk is a quote from Picasso “Inspiration exists, but it has to find you working.” There is no waiting for the muse to visit — you show up and work. As such, writing is not an add-on to Stephanie’s day but the main focus of it. She works office hours starting to write at 9 in the morning and working throughout the day. Some days are better than others; her husband can spot a bad day if Stephanie has cooked up a feast for dinner. “We all run from our work, and I escape writing by cooking,” she says.

It’s important to set goals and deadlines, Stephanie works towards 10,000 word chunks, broken down into smaller quotas of scenes rather than pages or word counts. She’s written 95,000 words, and is on the final stretch — the novel should be finished and ready to send to agents in November. “I have received a lot of interest in the book, but I won’t send it out until it’s finished. It needs to be ready.”

“Inspiration exists, but it has to find you working.” Picasso

There’s a lot we can learn from Stephanie Scott’s journey from aspiring writer to acclaimed author. Here’s some practical approaches you can try.

Based on an original interview for Prolifiko published on July 9, 2014.